One year ago, on October 31, 2004, CPO lost a true friend and one of our founding Board members, Art Herkenhoff. Art was a hero to many of us, not in the way our secular society looks at heroes, but a hero in all the areas that truly matter – in Faith, Family and Pro-life involvement. Art had enormous Courage in the face of opposition to proclaim the Truth of Jesus Christ and the Catholic Church, and he always exhibited true Charity, Humility and Joy!

Our Board of Directors is very pleased to announce that the “Arthur A. Herkenhoff Award” will be presented annually to a Catholic person who exhibits the same qualities, principles and values which characterized the life and person of Art Herkenhoff.

Throughout this past year we have received many nominations for outstanding people, and it was a difficult task to choose one person. The CPO Board of Directors voted on all the nominees and the 1st – 2005 Arthur A. Herkenhoff Award was presented to a wonderful woman, Mrs. Jenifer Latawiec!

Jenifer was nominated by her friend Lynn Langeslay. Here is how Lynn described Jenifer in her summary on the nomination form:

Jenifer Latawiec is a faithful Catholic, mother and wife whose one goal is to live her life according to God’s will. One can see the fruit of that in her marriage, in the character of her children, and also in her work to save God’s children from abortion.

Jenifer and her husband Douglas, have been married for 19 years. They have 5 adopted children and 5 biological children: Jacinta, Gabrielle, Michael, Ave, Joseph, Raphael, Bernadette, Lucia, Xavier, and Emmanuel.

Jenifer was a founding member and volunteer counselor for the Women’s Life Care Center, where she currently serves as Vice President. For many years she has been a dedicated sidewalk counselor at an abortion clinic with Pro-Life Action Ministries. She has taught many of her children to do side-walk counseling and they do it together every Sat. morning. Jenifer has volunteered with Human Life Alliance; the East European Children’s Fund; and the Home Schooling Co-operative.

Jenifer and Doug have a deep devotion to the Rosary which is prayed every day with their children, and included in their active family prayer life is Eucharistic Adoration, Scripture reading, the Chaplet of Divine Mercy and many Novenas.

Jenifer is an excellent candidate for this award and one that would bring a smile to Art’s face and heart.

Mrs. Jenifer Latawiec received the 1st, 2005 Arthur A. Herkenhoff Award at the CPO annual Luncheon & Fund-raiser at the Town & Country Club, in St. Paul on October 29, 2005. 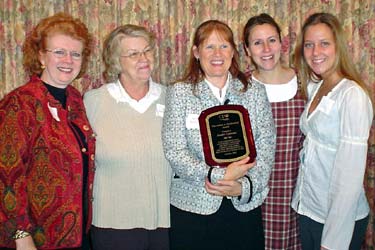