Catholic Parents OnLine is pleased to announce the Arthur A. Herkenhoff Award to be presented annually to a Catholic person who is fully committed to Faith and family. The Board of Directors of Catholic Parents OnLine seeks the names of individuals who would be worthy of nomination for the Arthur A. Herkenhoff Award. The persons nominated should exhibit the same qualities, principles and values which characterized the life and person of Art Herkenhoff, namely, Faith, family, prolife involvement, courage, charity and joy. 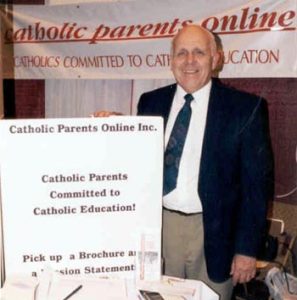 Art was a man who placed God as the top priority in his life. Everything else flowed from his love for his Catholic Faith. His vocation to be a husband and father found him serving God by selflessly serving his family. His conviction that the Truth is revealed by God and is God led Art to courageous involvement in many activities, but there was none about which he was as passionate as the right to life. Art was convinced of the truth that life is a gift from God and that the right to life is the first and most important right given in creation to each person. From this right to life flow all other rights. Art would talk with anyone and he would always be ready to debate and defend the truth. He would walk into meetings and presentations of people who were in complete disagreement with him and there he would question them and debate with them. In all instances Art , maintained his charity toward the other person(s) and always treated them with respect and dignity. Art acknowledged the problems in the Church and in the world, but he always maintained his joy and a positive disposition.

Arthur Herkenhoff received the reward of his labors on October 31, 2004 when, at a Mass being offered in reparation for the abuses against the Eucharist, he died in Church at the moment of the Consecration. You can read more at: In Loving Memory of Art Herkenhoff

If you know of anyone whom you would consider worthy of this award, i.e., someone who has the ability to change another person’s life through his or her words and example as demonstrated by the qualities mentioned above, please complete the nomination form at: