Three years ago, on October 31, 2004, CPO lost a true friend and one of our founding Board members, Art Herkenhoff. Art was a hero to many of us, not in the way our secular society looks at heroes, but a hero in all the areas that truly matter – in Faith, Family and Pro-life involvement. Art had enormous Courage in the face of opposition to proclaim the Truth of Jesus Christ and the Catholic Church, and he always exhibited true Charity, Humility and Joy!

Our Board of Directors is very pleased to announce that the “Arthur A. Herkenhoff Award” will be presented annually to a Catholic person who exhibits the same qualities, principles and values which characterized the life and person of Art Herkenhoff.

Throughout this past year we have received many nominations for outstanding people, and it was a difficult task to choose one person. The CPO Board of Directors voted on all the nominees and the 3rd – 2007 Arthur A. Herkenhoff Award was presented to a wonderful woman, Mary L. Ball.

Mary is the mother of 2 children and grandmother of 7. After practicing law for 13 years in several states across the country, Mary experienced a major spiritual conversion. Mary attends daily Mass and often daily Eucharistic Adoration. Mary has a deep devotion to the Blessed Mother. She is a 3rd Order Dominican, a member of the Legion of Mary and the Center for Bioethical Reform. Mary is a staunch defender of the unborn and her Catholic faith.

God’s grace instilled in Mary a strong desire to leave behind the life she knew and strive to do only His work. She soon turned her attention to the pro-life movement along with a desire to use her legal skills in some manner to help the pro-life cause. After several years of doing sidewalk counseling at abortion centers, a friend and Catholic attorney, Greg Troy, suggested to her the idea of creating a Catholic adoption agency that would focus on offering Catholic couples – who are hoping to adopt a child – the opportunity to pray at the abortion centers and then personally offer pregnant women the choice of adoption as the loving answer to abortion.

So in October of 2001, after two years of many trials and tribulations, the Holy Family Catholic Adoption Agency was formed. This agency exists exclusively to save babies from abortion. Couples working with the agency are not asked for the normal adoption fees, instead they are asked for prayer, because they know babies are going to be saved from abortion through intense prayer and sacrifice. The couples agree to spend at least one hour a week before Jesus in the Blessed Sacrament. They are also encouraged to come with Mary and others to the abortion center to pray – as mothers are going in for abortions.

And Greg Troy had this to say about Mary:

Mary’s passion for life is revealed in everything she does whether that is as the exec. dir. of Holy Family Catholic Adoption Agency, previous sidewalk counseling coordinator at Pro-life Action Ministries, or weekly babysitting for her grandchildren.

Mary is a living testament. Her life is a testament to the fact that what remains when all else is striped away from one in this world, is the God given dignity bestowed on every human being, whether they be recovering attorneys waiting for re-deployment in the culture war God calls us to be faithfully engaged; or the despairing pregnant mother and her defenseless child in the womb praying for a way out.

Mary strives to remain simple in this over-paced world. She knows the battle that God has placed her on the front lines to defend. She sees what is invisible to the birth mother’s full of fear. In that simplicity God has chosen to use Mary to focus His strong beam of light on top of the modern day slaughter of holy innocents. In front of the abortion clinics Mary has been trained and provided with the weapon of her rosary, where she has met up with injustice and police officers wanting to be judge, jury and executioner.

Thank you Mary for saying “yes”. 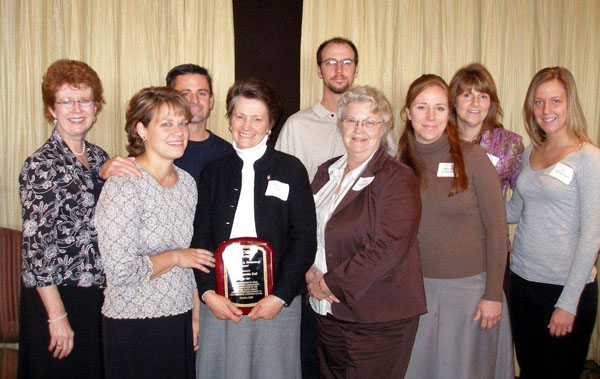